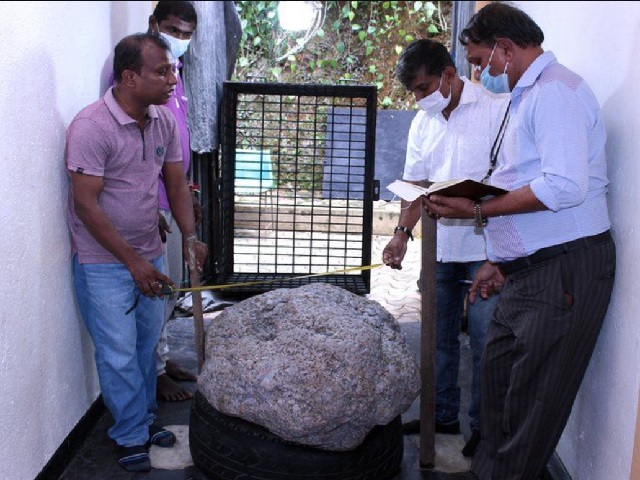 The world’s largest star sapphire cluster has been found by accident in a backyard in Sri Lanka. The newly found rock is named the ‘Serendipity Sapphire’.

Sri Lankan authorities informed that the cluster was found by the workmen digging a well in the backyard of a house in the gem-rich area of Ratnapura. The name Ratnapura means city of gems and it is known as the Sri Lankan’s gem capital.

The sapphire cluster was discovered in the house of a gem trader who informed that the person who was digging the well alerted about some rare stones and they later stumbled upon this huge specimen.

The gem trader alerted the authorities, however, it took over a year to clean the cluster before they could even analyze and certify it.

During the cleaning process of the cluster, a few stones fell out and were found to be of high-quality star sapphires, a pale blue in color.

The experts, however, have warned that though the specimen found has a high carat value of 2.5 million, it is a probability that all the stones inside the found cluster may not be of high quality.

A renowned gemologist, Dr. Gamini Zoysa, said that he has never seen such a large specimen before and that this was probably formed before 400 million years ago.

What will happen to the newfound Star Sapphire Cluster?

The official of the National Gem and Jewellery Authority of Sri Lanka said that it is a special Star Sapphire specimen, probably the biggest in the world

Given the size and the value of the Sapphire, it might be of interest to private collectors or museums.

A Star Sapphire is a type of sapphire that exhibits a star-like phenomenon called asterism.