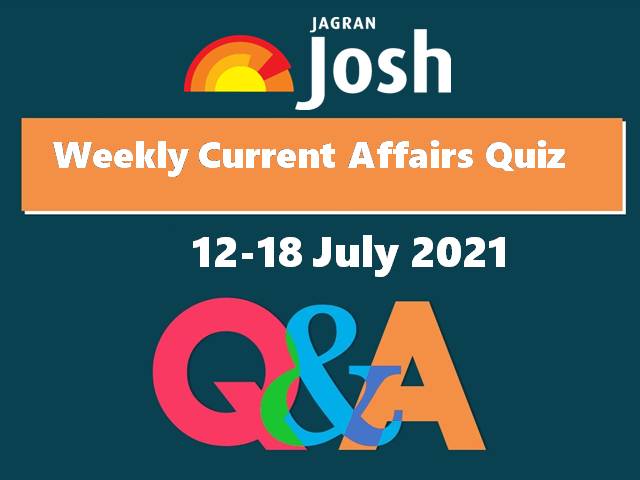 1. Which payment system has been barred from issuing new cards from July 22?

3. Serum Institute of India will begin manufacturing which among the following vaccines in India from September 2021?

4. World’s first conjugate Covid-19 vaccine Soberana 2 has been developed indigenously by which nation?

5. Asia’s first national dolphin research centre will be built in which Indian city?

6. When is Malala Day observed?

7. Which nation has become the second country to adopt India’s BHIM-UPI?

8. Which banned Chinese fashion brand is set to re-enter India through Amazon?

9. Google meet has put how much time limit on group video calls with 3 or more participants?

12. Who was the first Indian to win a junior Grand Slam title?

The Reserve Bank of India on July 14, 2021 barred Mastercard Asia / Pacific Pte Ltd (Mastercard) from issuing new credit, debit and prepaid cards with effect from July 22 for its failure to comply with its data storage norms.

India’s retail inflation stood at 6.26 percent in June 2021, which is slightly down from 6.30 percent in May but still well above the Reserve Bank of India’s (RBI) threshold of 6 percent. This is as per the data issued by the Ministry of Statistics and Programme Implementation on July 12, 2021.

India and Asia’s first National Dolphin Research Centre (NDRC) will be set up on the banks of the River Ganges in the Patna University campus in Bihar. The work on the centre is expected to begin after the monsoon season.

The Malala Day is observed on July 12, on the birthday of the young activist, Malala Yousafzai. The United Nations had designated July 12 as Malala Day to honour the young woman who has been a prominent activist for female education since her early teens.

Bhutan has become the second country after Singapore to have BHIM-UPI acceptance at merchant locations. Union Finance Minister Nirmala Sitharaman along with Finance Minister of Bhutan Lyonpo Namgay Tshering launched BHIM-UPI in Bhutan on July 13, 2021, through a virtual ceremony.

Banned Chinese fashion brand Shein is set to make a comeback in India through Amazon during its upcoming Amazon Prime Day Sale, as per the sale banner. The sale will be launched across India from midnight of July 26 till July 27.

Google has put a 60-minutes limit on Google Meet group video calls with three or more participants for free users with personal Gmail accounts. Google had earlier in September 2020 lifted the time cap on Google Meet duration amid the pandemic and extended it to June 2021. The tech giant has now reinstated the 60-minute time limit.

World number one Novak Djokovic won his sixth Wimbledon title when he defeated Italy’s Matteo Berrettini 6-7, 6-4, 6-4, 6-3 at the Centre Court in the finals of Wimbledon Men’s Singles 2021. With the win, Djokovic has now equal Roger Federer and Rafael Nadal’s tally of 20 Grand Slams. This is  Djokovic ‘s third Grand Slam win this year after winning the Australian Open and French Open. He will now look to win the last Grand Slam- the US Open as well to finish the year on a high.

Italy won the European Championship for the first time since 1968. Italy beat England 3-2 during penalties to lift the cup at the Wembley stadium on July 11, 2021. Italy’s goalkeeper Gianluigi Donnarumma was named the player of the tournament.