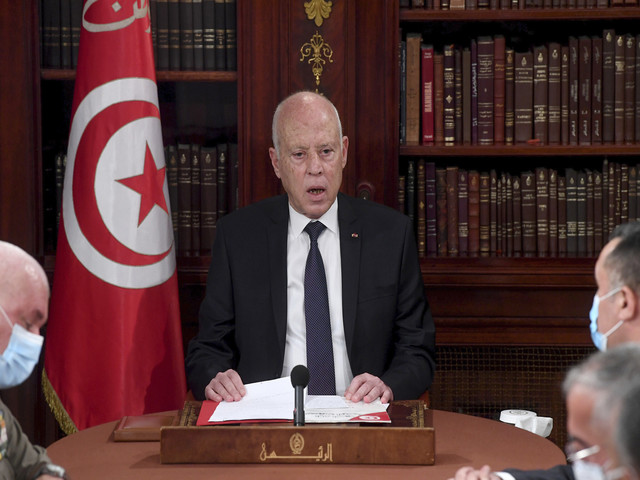 Tunisia’s President Kais Saied on July 25, 2021, suspended the Parliament and dismissed Prime Minister Hichem Mechichi amid the ongoing nationwide protests over the country’s social and economic turmoil and the government’s way of handling the COVID-19 pandemic.

President Kais Saied’s decision was met huge crowds of people cheering and honking car horns that resembled the 2011 revolution that gave rise to democracy and the Arab Spring protests. With the backing of the largest party in Parliament, Ennahda, President Saied suspended the Parliament and dismissed Prime Minister Hichem Mechichi.

Reasons for protests in Tunisia – Background

•President Saied and the Parliament were elected in 2019 in separate votes whereas Mechichi took charge as PM in September 2020.

•President Saied has been caught up with political disputes with PM Mechichi for over a year as the country has been battling with an economic crisis, financial crunch, and failing response at managing the COVID-19 pandemic.

•With the soaring death and infection rate of COVID-19 in the country and government fiasco with vaccination centers, the removal of the health minister amid pandemic crisis has further been fuelling the disputes and public anger against the government.

•As per Tunisia’s Health Ministry, only 7 per cent of the population has been vaccinated against COVID-19, 90 per cent of the ICU beds in the country are occupied. Morgues have been facing challenges in handling death cases. The government has been accused of poor handling of the infection during pandemics.

•Amid all the political, economic, and health crises in Tunisia, PM Mechichi’s attempts at negotiating a loan with the International Monetary Fund and introduction of government subsidies on food and fuel further outraged the protestors demanding the dissolution of the parliament.

•Amid such roaring violent protests, President Saied declared to suspend the Parliament and remove PM Mechichi. Saied stated that many people were being deceived by treachery, hypocrisy, and robbery of their rights. He said his actions are in line with Article 80 of the Constitution that has been invoked to suspend the immunity of members of Parliament.