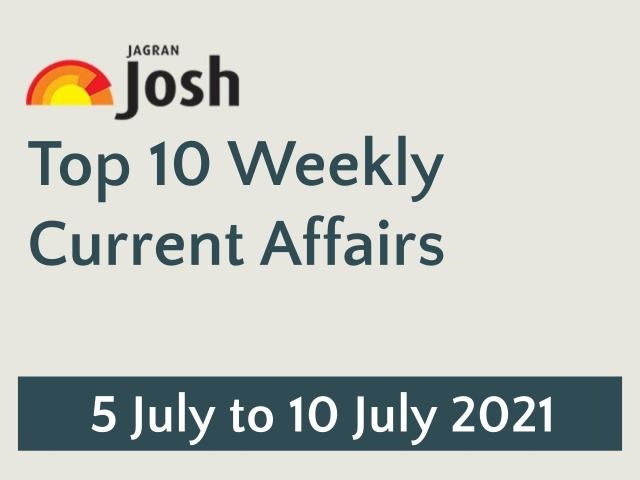 Indian origin Sirisha Bandla is all set to become the second Indian-born woman to fly into space after Kalpana Chawla. Bandla, the Indian-American astronaut who grew up in Houston, will be one of the six crew members aboard Richard Branson’s Virgin Galactic flight ‘VSS Unity’.

The administration of Jammu & Kashmir has banned the use of drones or any other unmanned vehicles in Srinagar. The decision came after two personnel of the Indian Air Force were injured in drone-driven blasts in Jammu.

Jeff Bezos has stepped down as the Chief Executive Officer of Amazon. He left his position exactly 27 years after he founded an e-commerce firm in a garage. Andy Jassy, CEO of Amazon Web Services, has succeeded Bezos as the new CEO of Amazon.

Captain of Men’s Hockey team, Manpreet Singh, and ace boxer Mary Kom will be the flagbearers for the Indian contingent at the opening ceremony of the upcoming Tokyo Olympics. Tokyo Olympics 2020 will be held from July 23 to August 8, 2021.

In a much-anticipated cabinet reshuffle, a total of 43 leaders took oath as the ministers in the Union Cabinet. The meeting of the Union Cabinet expansion took place on July 7, 2021. Jyotiraditya Scindia, Sarbananda Sonowal has been given some of the significant positions in the cabinet. Check the complete list.

The government has formed the Ministry of Cooperation. The ministry by Center has been established with the purpose of implementing the vision of ‘Sahkar se Samriddhi’ or prosperity through cooperation.

The former Chief Minister of Himachal Pradesh and veteran Congress leader Virbhadra Singh passed away at the age of 87. He was diagnosed with COVID-19 earlier and was also admitted to the hospital. Singh had served as the CM of Himachal Pradesh for 6 terms.

Two new species of spiders have been discovered in the Jharbari range in Assam. Gravelyia Boro, found for the first time, is the burrow spider that lives approx. 10-15 cm below the ground. They have been found in Chirag Reserve Forest.

The tallest sandcastle in the world has been built in Denmark and has been included in the Guinness World records. The sandcastle is 3.5 meter taller than the one which was built in Germany in 2019.