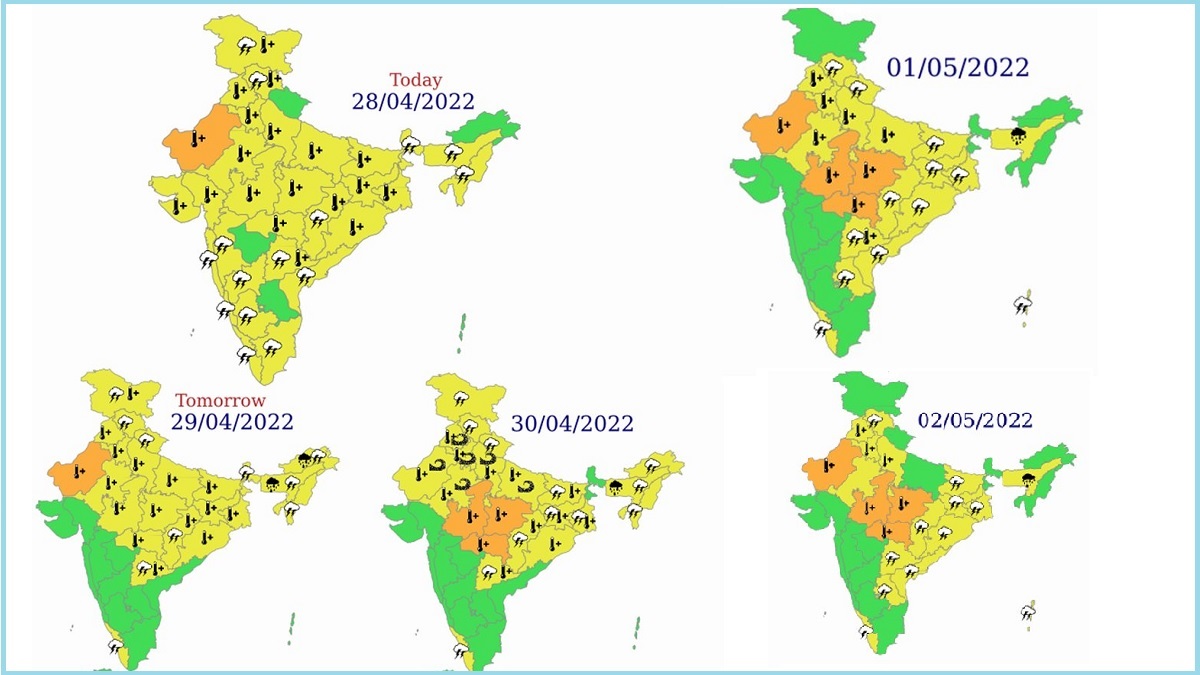 India Heatwave 2022: A severe heatwave has gripped most parts of India since the beginning of summer in March this year. Summer came early this time with record temperatures being reported in March itself. Several states reported record power cuts in April amid sweltering heat. The India Meteorological Department on April 27, 2022 predicted heatwave conditions in large parts of the country for at least the next five days till May 2nd.

The IMD has also issued a yellow alert in Delhi after the national capital recorded the highest temperature of 44.2 degrees Celsius at Siri Fort Complex on April 27. The temperature is expected to move around 44-45 degrees Celsius in the capital in the next couple of days, approaching the record high temperature for April month.

The temperature is expected to rise across north and east India by a minimum of 2-3 degrees in many places including Delhi, Punjab, Haryana, Uttar Pradesh, Rajasthan, Jharkhand, West Bengal, Odisha, Chhattisgarh and Bihar. Jammu recorded its hottest day of the season so far with the temperature touching 40 degrees Celsius on April 27th, which is 4.4 notches above normal for this part of the season.

According to the Indian Meteorological Department, March was the hottest month in 122 years. The temperature in the month of April is also touching record heights, which has led several states to call for early summer vacations to shelter the children from the heatwave conditions.

West Bengal Chief Minister Mamata Banerjee on April 27, 2022 urged the state education minister Bratya Basu to announce May 2 as the date for the onset of summer vacations in schools, colleges and universities amid the prevailing heatwave conditions in the state. She has also asked the private schools to implement this.

Karnataka government had announced summer vacations earlier only from April 10 to May 15. The schools in Andhra Pradesh will also be shut for summer vacations from May 6 to July 4. The Chhattisgarh education department also announced that the summer holidays will begin this year on April 24 and end on June 14.

Slight relief in heat from May 2nd?

According to IMD scientist RK Jenamani, northern India will likely experience a dust storm on April 29, causing a drop in temperature from May 1 onwards. Other weather experts also predict the prolonged heat to continue until May 2, thereafter chances of pre-monsoon activities are expected to commence over Punjab, Haryana, Delhi, north Rajasthan and western parts of Uttar Pradesh.

What is a heatwave?

A heatwave is a period of excessively hot weather that lasts for more than two days. Heatwaves can occur with or without high humidity and have the potential to cover a large area, exposing a large number of people to hazardous heat conditions that can lead to heatstroke, dehydration and heat exhaustion.

How to survive a heatwave?

2. Avoid being out in the sun.

5. Try and stay in shaded places when outside or seek shelter indoors.

Read Also: Earth Day 2022: Google highlights climate change impact through Doodle, know which places are getting affected the most

What was the Hottest Day ever recorded on the Earth?

The hottest day ever in the world was recorded on July 10, 1913 when a temperature of 134.1 degrees Fahrenheit (56.7 degrees Celsius ) was recorded at Death Valley in California, United States.

What was the hottest day ever in India?

Cause of Heat Waves in India

The rise in global temperatures and the frequency and intensity of heatwaves, especially in India in recent years are a result of climate change. According to a climate scientist at the Indian Institute of Tropical Meteorology, Roxy Mathew Koll, while more research is needed to link the current heatwave directly to climate change, “the root cause for increasing heat waves in the Indo-Pakistan region is global warming due to human-made carbon emissions.”