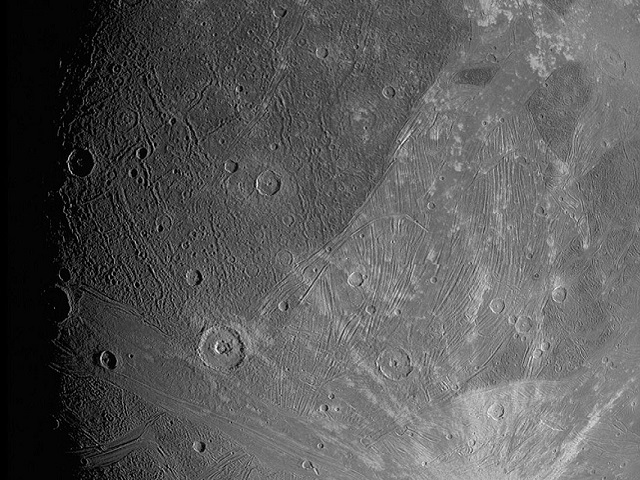 Scientists have discovered the first evidence of water vapour in the atmosphere of Jupiter’s icy moon Ganymede with the help of the Hubble Space Telescope.

The researchers discovered thermal escape of water vapour from the moon’s icy surface, which pointed to a sublimated water atmosphere on Ganymede.  The results were published in the Nature Astronomy journal.

Jupiter’s moon Ganymede is the largest moon and the ninth-largest celestial body in our Solar System. Hubble’s official Twitter handle tweeted, “Ganymede may hold more water than all of Earth’s oceans, but temperatures are so cold that water on the surface freezes & the ocean lies roughly 160 km below the crust.”

How was the discovery made?

•The images revealed a pattern in the observed emissions from the moon’s atmosphere.  Ganymede displayed auroral bands similar to the auroral ovals observed on the Earth and other planets with magnetic fields.

•These images served as evidence that the icy moon has a permanent magnetic field.

•The researchers deemed the similarities between the two ultraviolet observations to be due to the presence of molecular oxygen, O2.

•The differences between the two ultraviolet observations were explained by the presence of atomic oxygen- O, which produces a signal that affects one UV colour more than the other.

•In 2018, Lorenz Roth, a researcher at the KTH Royal Institute of Technology in Stockholm, Sweden, led a team of researchers who set out to capture UV spectra of Ganymede using Hubble’s Cosmic Origins Spectrograph (COS) instrument to measure atomic oxygen presence.

•The research was a part of a large observing programme to support NASA’s Juno mission.

•The scientists carried out a combined analysis of new spectra taken in 2018 with the images from 2010 and 1998.

•The scientists discovered that there was hardly any atomic oxygen in Ganymede’s atmosphere, in contrast to the original interpretations of the data from 1998.

•This meant that there must be a whole new explanation for the difference between the UV aurora images.

•Roth along with his team uncovered the explanation in the relative distribution of the aurorae in the two images.

•The researchers discovered that the surface temperature of the icy moon varies strongly throughout the day and becomes sufficiently warm around noon, which leads the icy surface to release small amounts of water molecules.

•The differences between the UV images were directly correlated with where the water molecules would be expected in Ganymede’s atmosphere.

•The researchers discovered that the water vapour originates from ice sublimation caused by the thermal escape of H2O vapour from warm icy regions.