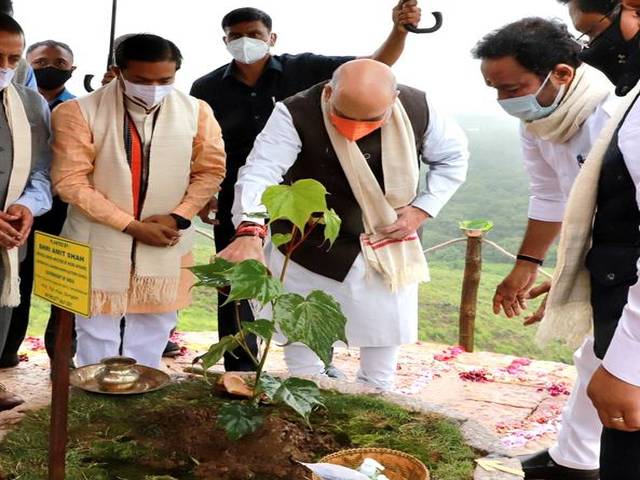 Union Home Minister Amit Shah launched the Green Sohra Afforestation Campaign at Sohra (Cherrapunji) during his visit to Meghalaya. Read all you need to know.

‘Evergreen Northeast’ slogan was devised by Amit Shah to highlight the significance of tree plantation and afforestation. He said that Cherrapunji earlier used to receive rains throughout the year but development and harvesting projects have changed that.

As part of the tree plantation drive launched by Amit Shah, all the Central Armed Police Forces (CAPFs) planted trees across the country. More than 16 lakh and 31 thousand saplings are being planted under the campaign.

•The Assam Rifles will take the entire area of Cherrapunji for plantation purposes. 80 per cent of the total land will be planted with long-lifespan and traditional trees while 20 per cent will be put to use for animal feed, nurseries, and ornamental plants.

•Three years from now, the technique implemented by this campaign will lead to multi-level farming which will eventually help forests grow 30 times faster.

•The campaign will benefit eco-tourism and the overall tourism in Meghalaya.

•The Government of Meghalaya and the Ministry of DoNER, under the North-East Special Infrastructure Scheme, have launched the Greater Sohra Water Supply Scheme as a part of the Jal Jeevan Mission.

•The Scheme costs Rs 25 crores that will provide pure drinking water through taps to 2,80,000 households in Meghalaya.