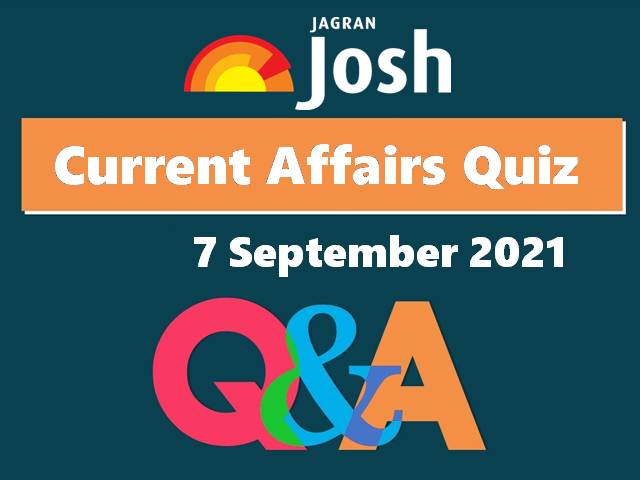 7 September 2021: The Current Affairs Quiz section of Jagranjosh aims to help every competitive exam aspirant to revise Current Affairs of the day at ease. The day’s updated Current Affairs quizzes cover topics such as Seed Money Project, COVID-19 vaccination for toddlers and  world’s first all-civilian space mission among others.

1. Michael K. Williams, who passed away recently, essayed the popular role of Omar Little in which among the following TV shows?

d) The Night Of

3. Which political leader has claimed to be placed under house arrest?

4. Former SBI Chairman Rajnish Kumar has been appointed as the economic advisor of which Indian state?

5. Which Indian spacecraft has completed 9000 orbits around the Moon?

6. Which country has become the first to start COVID-19 vaccination for toddlers?

7. What is the name of the 1000th near-earth asteroid that passed the planet recently?

8. When will the world’s first all-civilian space mission-Inspiration4 be launched?

American actor, Michael K Williams passed away on September 7, 2021 at the age of 54. He was popular for his role ‘Omar Little’ in the gritty TV series The Wire and as Chalky White in Boardwalk Empire and had most recently appeared in HBO’s “Lovecraft Country” and the series “F Is for Family.”

Delhi Deputy Chief Minister and Education Minister Manish Sisodia announced seed money worth Rs 2,000 for 3,50,000 students across 1,000 government schools on September 6, 2021 under the Seed Money Project. The seed money project aims to build up the business skills of students.

Former Jammu and Kashmir Chief Minister Mehbooba Mufti claimed on September 7, 2021 that she has been placed under house arrest. The PDP leader tweeted saying that the situation is far from normal in Kashmir

Former SBI Chairman Rajnish Kumar has been appointed as the economic advisor of Andhra Pradesh by the YS Jagan Mohan Reddy-led Andhra government. Rajnish Kumar will serve at the cabinet rank position for a term of two years.

The Indian Space Research Organisation (ISRO) informed on September 6, 2021 that the Chandrayaan-2 spacecraft has completed 9,000 orbits around the moon. The spacecraft has detected minor elements of manganese and chromium at few places on the lunar surface through remote sensing during the intense solar flare events.

Cuba became the first country in the world on September 6, 2021, to start vaccinating toddlers with the COVID-19 vaccine. Children above 2 years of age are being vaccinated in Cuba with home-grown vaccine shots, which are not yet recognized by the World Health Organisation (WHO).

The Jet Propulsion Laboratory (JPL) of the National Aeronautics and Space Administration (NASA) on August 14, 2021, marked the 1,000th Near-Earth Asteroid named ‘2021 PJ1’as it passed Earth at a distance of approximately 1.7 million kilometers. The asteroid was not a threat to the planet.

The world’s first all-civilian mission to orbit will be launched on September 15, 2021. The mission, named Inspiration4 will be launched aboard Falcon 9 rocket of SpaceX from NASA’s Kennedy Space Centre in Florida, US. The mission will have no professional astronauts, as all four mission members are private citizens.