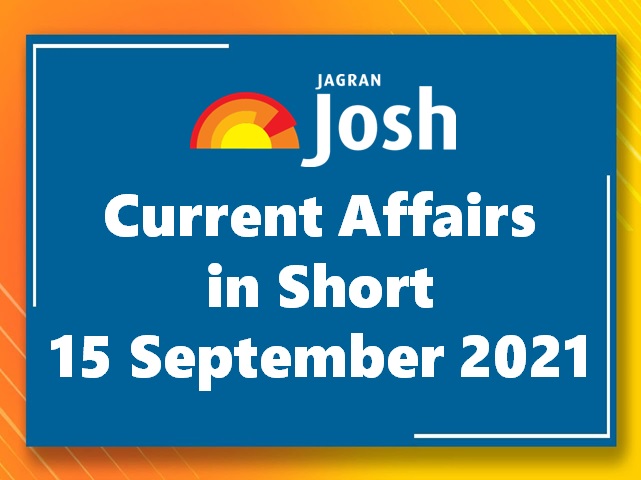 EU to increase humanitarian aid for Afghanistan by USD 118 million

•The extra USD 118 million as a part of a new, wider Afghan Support Package comes in when EU Foreign Policy Chief Josep Borrell on September 13 said that the European Union has no other option but to engage with the Taliban group in Afghanistan if its wants to influence events in the country.

•The United Nations (UN) has appealed to countries that have pledged USD 1.2 billion in relief for Afghanistan to urgently release the funds.

•NITI Aayog will launch a report on Reforms in Urban Planning Capacity in India on September 16, 2021. The Report will be launched by NITI Aayog Vice-Chairman Dr Rajiv Kumar and Education Minister Dharmendra Pradhan in the presence of NITI Aayog CEO Amitabh Kant.

•The Report on Reforms in Urban Planning Capacity in India includes a set of recommendations on various aspects of urban planning such as optimum utilization of urban land, interventions for planning healthy cities, building local leadership, strengthening urban governance, ramping up human-resource capacities, advancing the urban planning education system, and enhancing the role of the private sector.

•NITI Aayog had established an Advisory Committee on ‘Reforms in Urban Planning Education in India’ in October 2020. The Committee has included its mandate in the Report.

•India and UK have aimed to launch the negotiations on Free Trade Agreements (FTA) by November 1, 2021. The launch plan came up during the discussions between Commerce Industry Minister Piyush Goyal and his British Counterpart Secretary of State Elizabeth Truss.

•Commerce Industry Minister Goyal said that the proposed FTA between both countries will generate jobs and unlock extraordinary business opportunities. The business community in both India and UK has a tremendous interest in the FTA.

•Goyal further said that substantial work has already been done and extensive stakeholder consultations have been held between Industry, Export Promotion Councils, Business Associations, and Buyers and Sellers Associations. The consultation paper pertaining to the FTA was also made public for wider participation.

•The highest and the most prestigious ‘Rajbhasha Keerthi Puraskar’ award was given to National Mineral Development Ltd. (NMDC) under the Ministry of Steel during the Rajbhasha Diwas Samaroh in New Delhi on September 14, 2021.

•NMDC got the 3rd prize in the category of Undertakings situated in the ‘C’ region during 2019-20. NMDC has been winning the Rajbhasha Keerthi Puraskar award for the past three years in a row. The award is presented to recognize the efforts towards the implementation of Hindi as the official language.

•Vishakhapatnam Steel Plant was also presented with the Rajbhasha Keerthi Puraskar (first prize) for the effective implementation of Hindi as the official language during 2020-21.

India, US sign MoU to increase export potential of Ayurvedic and Indian medical products to US

•The Ayush Minister, Government of India signed an MoU with the US to strengthen the quality of Ayurvedic and other Indian traditional medicine products globally and also to increase their export potential to the US market.

•The MoU to increase the export potential of Ayurvedic and Indian medical products to the US was signed between the Pharmacopoeia Commission for Indian Medicine and Homoeopathy and the American Herbal Pharmacopeia, US.

•The MoU aims to strengthen the promotion and development of standards in the field of Ayurveda and other Indian traditional systems of medicine between India and the US on the basis of equality and mutual benefit.