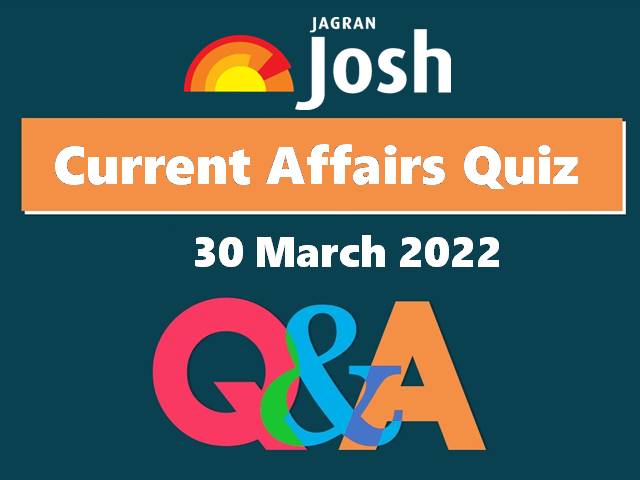 2. When was BIMSTEC founded?

3. When is the last date to link PAN with Aadhaar?

4. When is Rajasthan Foundation Day observed?

5. The Dearness Allowance for central government employees has been hiked by how much percent?

6. When will the Supreme Court of India start fully physical hearings?

7. Which nation’s Foreign Minister will be visiting India between March 31st and April 1st?

8. When is World Bipolar Day observed?

The BIMSTEC Summit 2022 was hosted in a hybrid mode by Sri Lanka, the current chair of BIMSTEC on March 30, 2022. Sri Lankan President chaired the 5th BIMSTEC Summit with the virtual participation of leaders of Bangladesh, Bhutan, India, Nepal and Thailand. Myanmar’s Foreign Minister represented the nation physically at the summit.

Rajasthan Foundation Day is observed on March 30th to commemorate the formation of the state. Rajasthan was formed on March 30, 1949 when Rajputana was merged into the Indian Union. Rajasthan is the largest state in India by area, covering 10.4 percent of India’s total geographical area.

The Dearness Allowance (DA) of the central government employees and Dearness Relief (DR) to pensioners have been increased by 3 per cent to 34 per cent of the basic pay with effect from January 1, 2022.

The Supreme Court of India will start fully physical hearing of cases from April 4th. This was announced by Chief Justice of India N V Ramana on March 30th. He said that the court will provide advocates virtual hearing if they ask for such options.

Russian Foreign Minister Sergey Lavrov is scheduled to pay an official visit to New Delhi, India between March 31 and April 1, 2022. The Russian Minister is currently holding multinational meetings on Afghanistan in China with representatives from Pakistan, Turkmenistan, Uzbekistan, Tajikistan and Iran. This is the first official visit of a Russian official to India after Russia’s invasion of Ukraine.

World Bipolar Day is observed on March 30 to spread awareness about the mental health disorder that affects people all over the world. The day is marked on the birth anniversary of world-renowned Dutch painter Vincent Van Gogh who lived with bipolar disorder his whole life. Bipolar disorder is a condition under which the person experiences extreme mood and energy changes which further hampers the capability of functioning normally.