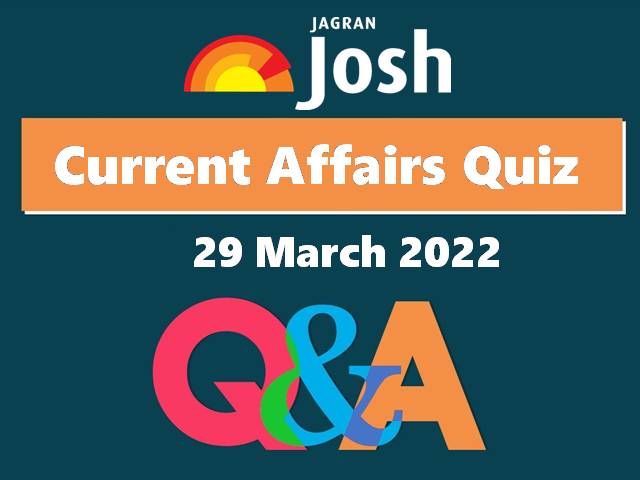 1. Which state was ranked first in the ‘Best State Category’ in the 3rd National Water Awards?

2. Which district won the Best District award in the North Zone in the 3rd National Water Awards?

3. Who has been named the new CEO of FedEx?

4. Who has become the third woman to win an Oscar for Best Director for Netflix’s ‘The Power of the Dog’?

5. Which Central American nation has declared a state of emergency?

6. Which country has qualified for its first FIFA World Cup in 36 years?

7. Which nation’s Prime Minister will have to reschedule his first official visit to India after testing positive for COVID-19?

Uttar Pradesh secured the first position in the ‘Best State Category’ in the 3rd National Water Awards, followed by Rajasthan and Tamil Nadu. President Ram Nath Kovind will be conferring the awards today in a special ceremony, that will also see the launch of Jal Shakti Abhiyaan: Catch the Rain Campaign 2022.

Indian American Raj Subramaniam was named the new Chief Executive Officer of FedEx on March 28, 2022. He will be succeeding FedEx founder and current Chairman and CEO Frederick W Smith, who will be stepping down from the position on June 1. FedEx is one of the world’s largest transportation companies with annual revenue of $92 billion.

Jane Campion has become the third woman to win ‘Best Director’ award for Netflix’s ‘The Power of the Dog’ at the 94th Academy Awards. This was her second Oscar award, as she had earlier bagged an Oscar for Best Original Screenplay for ‘The Piano’ in 1994. She had also been nominated for best director for her work on ‘The Piano’. She is the first woman to be nominated for best director twice at the Oscar awards. Kathryn Bigelow was the first woman to win an Academy Award for Best Director in 2010. Chloé Zhao was the second woman and first Chinese woman to win the Oscar for Best Director for the film Nomadland at the 93rd Annual Academy Awards in 2021.

El Salvador declared a state of emergency on March 27, 2022, extending police powers and curtailing civil liberties as the country faces soaring gang-related bloodshed that has already left dozens dead in just two days. The police reported that around 62 people were killed on March 26 and 14 on March 25th.

Canada beat Jamaica 4-0 to qualify for FIFA World Cup 2022, their first qualification in 36 years. The United States and Mexico will have to wait to learn their fate along with Costa Rica. The United States got a hat-trick as they beat Panama 5-1, while Mexico managed to pull of a 1-0 win against Honduras after a 70th-minute goal.

The visit of Israeli Prime Minister Naftali Bennett has been postponed and will have to be rescheduled after he tested positive for COVID-19. He was scheduled to pay his first official visit to India between April 3-5.