Are you studying ‘Blade Runner’ for English and struggling to come up with an analysis? Well, look no further as we’ve got you covered with the plot summary, key characters, context and themes of Blade Runner as well as a step-by-step guide on how to analyse the text.

PLUS we’ll provide you with a sample analysis table (also called a TEE table) and paragraph for the text!

So, what are you waiting for? It’s time to ace your analysis of Blade Runner — let’s jump into it!

The film is told from the perspective of Rick Deckard, a former police officer part of the special police squad known as ‘Blade Runners’.

Blade runners are responsible for hunting down and ‘retiring’ genetically engineered humanoids known as replicants. The Tyrell Corporation created replicants as slave labour to explore and colonise other planets and are declared illegal on Earth. 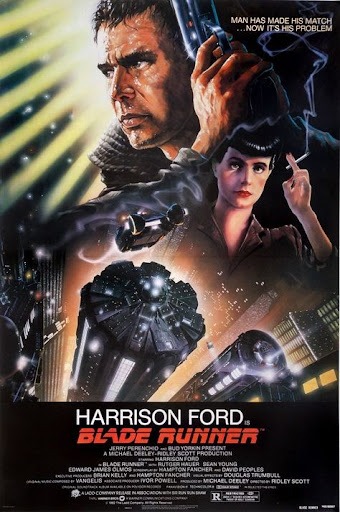 After four escaped replicants make their way back to Earth (Roy Batty, Leon, Pris and Zhora), Deckard is forced out of retirement to track them down. The leader of the replicants, Roy, is trying to break into Tyrell Corporations to extend their lifespans beyond their four-year limit.

Deckard goes to visit Dr Eldon Tyrell, which is where he meets Rachael, Tyrell’s assistant. Tyrell asks Deckard to perform the replicant test on Rachael to see if it works.

After finding a synthetic snake scale and photograph in Leon’s hotel room, Deckard returns to his apartment to find Rachael. She shows him a family photo, but Deckard explains that Rachael’s memories belong to Tyrell’s niece, causing her to leave in tears.

Using the clues in Leon’s room, Deckard is lead to the strip club where Zhora works, where he eventually kills her after a chase scene. Afterwards, Leon attacks Deckard and is about to kill him before being killed by Rachael. They go back up to Deckard’s apartment and share a romantic scene.

Meanwhile, Pris and Roy use J.F. Sebastian, a genetic designer who works with Tyrell, to enter Tyrell’s penthouse. After Tyrell tells Roy that it’s impossible to reprogram their life spans, Roy kills him in anger. Discovering that Tyrell and Sebastian have been murdered, Deckard goes to Sebastian’s apartment where he is confronted by Pris and kills her. When Roy returns, he breaks Deckard’s fingers and chases him up to the rooftop. Deckard jumps onto another roof but ends up hanging from the side.

Just as he is about to fall, Roy pulls him up and saves him. At the end of his lifespan, Roy tells Deckard that his time is up and his memories will be lost “like tears in rain” before he dies.

Officer Gaff congratulates Deckard and tells him that it’s too bad that Rachael won’t live. Deckard races to his apartment and finds Rachael asleep. He notices a silver origami unicorn before leaving the apartment with Rachael.

As Blade Runner has seven different versions, the ending varies between versions. If you’re watching the Director’s Cut or Final Cut, the movie ends with Deckard and Rachael in the elevator.

If you’re watching the original theatrical version, there is a happy ending where Deckard and Rachael drive away as the voiceover informs us that Rachael doesn’t have a four-year lifespan. This article focusses on the 1982 international theatrical release.

Deckard is a retired police officer of the Blade Runner unit who is forced back into action. Mirroring the film noir detective trope, Deckard is a complex character that is forced to confront his killing of replicants with his humanity, mainly through his romantic feelings for Rachael despite her being a replicant.

Rachael is Tyrell’s assistant who was created to be a special replicant with emotional responses by being embedded with fake memories. She is Deckard’s love interest, and depending on which version you watch, Rachael either receives a positive or ambiguous future.

Roy is one of Tyrell’s replicants who travelled to Earth to demand Tyrell extend their lifespans. Desperate to live a full life, Roy uses cold-blooded violence to meet his needs, yet ultimately, he is not a straight-cut villain.

In the final moments before his death, Roy saves Deckard and delivers a poignant monologue expressing his humanity, in which he comes to terms with the purposelessness of his life.

Head of the Tyrell Corporation, Tyrell’s company is the mastermind behind genetically engineering the Nexus 6 replicants for slave labour. Proudly declaring the ethos that replicants are ‘more human than human’, Tyrell meets his end after Roy confronts him about their limited lifespan.

Directed by Ridley Scott in 1982, ‘Blade Runner’ is set in the dystopian future of 2019 — yep, you heard me right! Depicting a futuristic, overpopulated and heavily polluted vision of Los Angeles, ‘Blade Runner’ sets the scene of corporatisation and technological advancements run rampant.

The main influences of ‘Blade Runner’ were the science fiction genre of cyberpunk and 1950s and 60s film noir. In mixing the dark detective narrative with a dystopian futuristic society, ‘Blade Runner’ illustrates how the technological revolution of the 1980s transformed the values of Western culture. As one of the most influential science fiction films of the 20th century, Blade Runner captures the concerns of expanding globalisation and multiculturalism, particularly of the East, during 1980s America. In particular, the demographics of the 1980s indicate large immigrant Chinese populations and was a time where China was a rising economic power in the West.

A significant visual aspect of Blade Runner is its depiction of hybrid urban landscapes lined with giant billboards of commercial advertisements and East Asian imagery. The consumer-driven society of the film reflects the fears of monopolistic corporations dominating the economy and the commodification of people. As a film, there are several cinematic techniques that aid in the deconstruction of key thematic scenes, such as colour, lighting, shot composition and sound effects. These techniques communicate the thematic elements of mood, tone and symbolism, and serve to highlight the film’s subversive ideas concerning the varying perceptions of humanity.

Below are some of the key themes from Blade Runner that make for a great starting point to structure your analysis:

Check out our list of literary techniques and visual techniques to help elevate your analysis of the themes in Blade Runner!

How to Analyse Blade Runner in 3 Steps

Students often try to start with their thesis while attempting to answer an essay question. Instead, you should use your analysis as the starting point! Analysing your text is a great way to gain an in-depth understanding of its meaning before you begin to answer anything about it.

After you’ve analysed your text, you will be able to build on its themes and construct a strong thesis!

We’re going to walk you through creating an analysis for Blade Runner in three simple steps!

When choosing your example, a pro tip is to search for a scene that contains a technique. Techniques are the key to helping you dig deeper into what meaning the composer is trying to convey.

We have chosen to look at religious resonances through two quotes:

“The light that burns twice as bright burns half as long, and you have burned so very very brightly, Roy. Look at you. You’re the prodigal son. You’re quite a prize!”

“Nothing the God of Biomechanics wouldn’t let you in Heaven for”.

When trying to locate a technique within your example, the best method is to identify a technique that enables you to uncover a deeper subtext of your work and elevate your argument and analysis.

Rather than referencing simple language techniques like alliteration and rhyme, try searching for techniques that unveil symbolic meanings like metaphors, motifs, allusions, and intertextuality.

We have identified 3 techniques in the two quotes above: religious allusion, symbolism and metaphor.

It’s always better to try and find multiple techniques in your quotes rather than just one, so you can really show off your analysis skills!

When you write your analysis, the key focus should be on what effect the technique has. Simply labelling what technique you’re using is not analysing and will award you minimal marks. Technique labelling would look like this:

The religious allusion of Roy as “the prodigal son” and the metaphor, “nothing the God of Biomechanics wouldn’t let you in Heaven for”, shows how Scott depicts Tyrell as a God-like figure.

Instead of labelling, we need to flesh out how each technique allows a closer reading of the text.

Firstly, the religious allusions are important as they establish a meta-narrative in which we can view the dichotomous relationship between Tyrell and Roy.

The symbolism of the religious pretext is important as the biblical parallels to God and the fallen angel raise the ideas of humanity, mortality, and redemption.

The metaphor in both quotes assigns the identity of father and son to Tyrell and Roy while connoting the biblical irony of Roy returning to Tyrell without reward. So if we included all that in our analysis, it looks like:

The religious allusion of Tyrell and Roy’s relationship as that of the biblical Father and Son is demonstrated when Tyrell refers to Roy as “the prodigal son” in response to his demand for more life. The symbolic parallel of Roy to the prodigal son is ironically fitting as, unlike his biblical counterpart, he returns not for forgiveness but for revenge as a fallen angel. The metaphor of Tyrell as the “God of Biomechanics” juxtaposes natural and artificial life and highlights the cold-hearted morality of the Master against the replicants enslavement.

Are you looking for some extra help with your analysis of Blade Runner?

We have an incredible team of tutors and mentors!

We can help you master your analysis of Blade Runner by taking you through the plot summary, context, key characters and themes. We’ll also help you ace your upcoming English assessments with personalised lessons conducted one-on-one in your home or online!

Ashley Sullivan is a Content Writer for Art of Smart Education and is currently undertaking a double degree in Communications (Journalism) and a Bachelor of Laws at UTS. Ashley’s articles have been published in The Comma and Central News. She is a film, fashion and fiction enthusiast who enjoys learning about philosophy, psychology and unsolved mysteries in her spare time.